I think this is especially true if we consider the context of Jeremy Lin’s career and why things have happened the way they have. There’s a narrative going around now (even with some Lin fans) that the best version of Lin was the NY version of him, and while on the surface it LOOKS true (since Lin was dropping 18-20PPG back in those days) – a large reason for his production back then was because he was in the perfect system for himself. In MDA’s system, the floor was spaced with 3 shooters + a rolling big, meaning Lin had room to efficiently drive OR run the PNR (both options, which just so happen to be his TWO BEST STRENGTHS). So really – it was the best system ever for Lin and his skillset, so when Jeremy talks about “perfect plan,” – honestly, Linsanity was it. He had everything there. Then Lin went to Houston and things LOOKED to get worse. I trust we all remember that first Houston season as Lin fans. Lin sitting in corners waiting for threes… not handling the ball as the primary ball-handler. Being benched for Toney Douglas… TONEY DOUGLAS… Well, spot-up shooting was definitely his greatest weakness going into Houston, so obviously if Lin was put in a spot-up shooting role (like he was), he was going to look a lot worse than he did when he was in NY, because now he was playing a role in which asked him to do tasks he wasn’t skilled enough to perform at consistently. On the flip-side, Houston itself ran a similar system that the MDA Knicks ran. So Lin DID get some opportunities to drive/PnR, and that’s where most of his first-season stats came from. It’s just that 50% of his arsenal was his “Linsanity” drive+PNR moves, while the other 50% was him spot-up shooting (a weakness). If we really look at that then, if a player is in a system that is always 100% playing to their strengths, they will obviously look as best as they can. However, if a player is in a system where they get to play to their strengths only half of their times, they won’t look as good. If we go even a step further and say that a player is in a system which plays to their strengths 50% of the time, and their WEAKNESSES 50% of the time, we can expect that this player will have bouts of “looking great,” and “looking terrible.”

Then going into the second Houston season, he worked in the off-season on his 3-ball – since he realized HE NEEDED to be a great spot-up shooter if he was going to make it in Houston. And guess what? He added that element to his game: 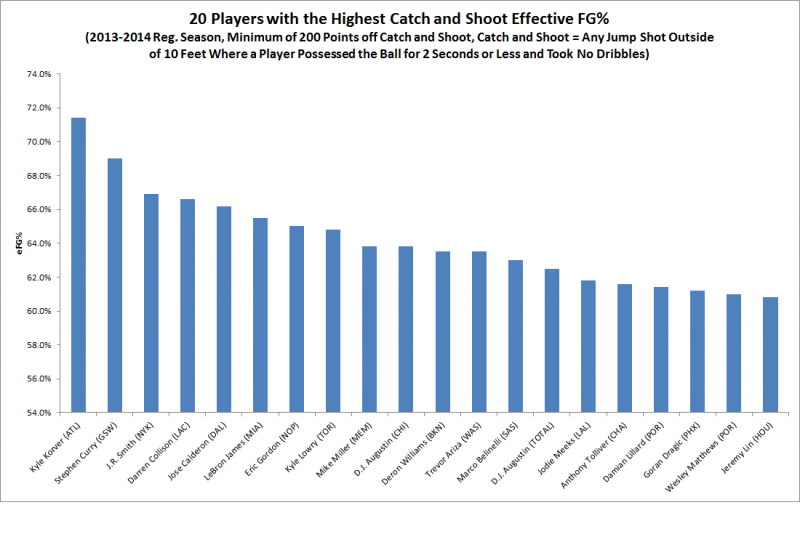 Becoming one of the best catch-and-shoot players in the league. Sweet right?! Jlin putting in the work! And now (hypothetically) when Lin + Harden would be paired together, if Harden drove to the rim and kicked out to Lin for the 3, that would no longer be a weak-point of Lin’s game (as it was in his first-season with the Rockets)! But instead of that happening, Lin was put on the bench, and now his GREATEST AREA of improvement obviously would not SHOW so blatantly, because YOU CAN’T CATCH AND SHOOT IF NOBODY CAN PLAYMAKE EXCEPT YOU. Lin couldn’t TAKE ADVANTAGE of his new catch and shoot abilities, because he was playmaking for the 2nd unit. So his overall stats WENT DOWN in his 2nd season, but in reality, his SKILL-SET IMPROVED and he shored up a glaring weakness in his game. So what happens after the 2nd Houston season…? Lin (not preparing to be traded) had been working on the skills that he would need to further bloom in Houston; as such, he kept working on his 3-ball and his individual drives to the rim. (Remember that Lin being traded was unlikely at the time, and only happened because of the Chris Bosh situation that sprung up out of nowhere after Lebron went to Cleveland).

Then boom – the trade happens and off to LA he goes – and now he’s in Scott’s system which emphasizes the BIGS playmaking at the top of the key, and CUTS to the rim by the perimeter players . Well, if the BIGS are playmaking on a good amount of the plays, then this inherently means that there aren’t a great amount of touches to go around for the perimeter players. Therefore (after this point in the offense), playmaking duties have to be split among the guards – and as it worked out – Kobe took most of the duties in many games – so the actual basketball situation Lin was in turned out to be THE WORST of his career, because all of his strengths were neglected and he was left in no-man’s land (he’s not even getting chances to stand in a corner and shoot 3’s like in Houston – because nobody can playmake in the LA system and get open 3s). So what was/is Lin to do now right? Well, let’s look at the facts of what Lin has to offer… Lin is now a PG with a great dribble-drive, great PnR ability, and an above-average 3ball. In almost all systems he would be great… except in the Lakers system – where the Bigs/Kobe are initiating the offense – and thereby eliminating the option for Lin to dribble-drive/PnR frequently. And on top of this, since nobody can actually consistently playmake on the Lakers except Lin, it also eliminates his chances for getting catch-and-shoot shots (his other strength).

So with regards to all of these strengths Lin has developed over his basketball career… and now his time in LA – it makes a lot of sense that in LA’s system and with the LA players, Lin just WASN’T going to look GREAT, since literally almost every strength of his was held down just by the nature of the system of basketball being run and the situation.

So what now right? Lin could’ve given up, said “Hey, there’s just too many factors going against me,” and he would’ve had a point if he said that. Lin is a very tactical guy, and if you hear him speak about basketball schemes in post-game interviews, he explains things methodically. For example, if he plays poorly – HE KNOWS why he played poorly – and all-season long he KNEW why he was struggling. He understood the spacing issues and the lack of ball-handling issues – and he knew that he had to solve them, and so now as the season has progressed, we are really seeing the ways in which he has been adjusting to solve them. Mainly, this season – Lin has been WORKING on adding a mid-range game to his arsenal. If you look at Lin’s midrange stats; last year on Houston- 16.4% of Lin’s shots were mid-range shots. This year, 29.4% of Lin’s shots are mid-range shots. Just like how (in the first season of Houston), 3-point shooting was a weakness of Lin’s (before he worked on it on the offseason to improve) – Lin is now treating his midrange game as the area that needs improvement. (That’s why in clips of him practicing lately, he’s doing all these step-back 2’s, and pull-up dribbles). Also, if you’ll pay very close attention to Lin’s 3-ball stats – on a first glance you could say – “Wow, JLin is shooting 37% from three now! That’s his career high! Great stuff!” But REALLY – Lin is the best 3-ball shooter he has even been now, and I think it’s even better than the 37% suggests. The reason I say this is because of one factor:

– 1. Catch and shoot 3s are A LOT easier to make than Iso-3’s. By nature, if you get a catch and shoot 3, the defense probably broke down and you are likely WIDE open when shooting it (as opposed to an iso-3, in which case you are basically 100% guarded while shooting).

Now when we look at Lin’s 3-Point Shooting over the last 2 seasons – we will see the following main facts:

– This year, Jeremy is shooting 37% from three.

– Jeremy is shooting 3% better from three this year.

– This means that on 84% of Jeremy’s made-threes, most were somewhat OPEN LOOKS (so obviously he should shoot these shots well and at a high percentage)

– This also means (however), that 44% of Lin’s made-3s are ISOLATION THREES (difficult threes)

So now that we’ve looked at all the systems Lin has been in, and how he has been improving in REGARDS to each system – I think it’s a VERY SAFE BET to say that Lin will do well on any team next year when he’s given any legitimate role. Lin can PnR, he can dribble-drive, he can playmake from both PnR/drives, he is a very-good-to-great transition player, he can shoot 3s at an above-average level, and HOPEFULLY (after this off-season), he will have a decent midrange game. (Even if he doesn’t have a decent midrange game after this season- his strengths far outweigh his shortcomings) – and being paired with another perimeter player who wants to playmake shouldn’t diminish his game too much.

(Also note that, VERY IRONICALLY, Lin has been paired with two of the highest usage guards in the league ever since he left NY, which played a large part in his overall raw-stats regressing – while in fact – Lin’s skillset has OBVIOUSLY been IMPROVING.)