The biggest news today is the injury of Nick Young. It was actually happened in day 3 of the TC

The MRI on Nick Young revealed a complete tear of the radial collateral ligament of his right (shooting) thumb. Surgery is set for Monday.

This basically rendered all game planing coaches had for the past few week useless. I envision Young to be a large helper to Lin’s time in LAL. This good thing is this type of injury usually ONLY takes about 8 weeks to heal. Therefore, that is about a month of regular season games.

Now back to Lin, all the unnecessary  imaginary negativities yesterday about Lin was just disappeared today like that. Lin looked so happy and relaxed in the interview (provided below). With a healthy environment like LAL, I think Lin will do great. He has nothing to prove, just need to play his game. Today’s practice is lighter. Seems like just some basic conditioning and some scrimmages where coach Scott was experimenting different lineups. Like I said earlier, once Scott instilled more complex sets, Lin’s value will be even higher for this team.

BONUS for today. TWCSN’s Video on Lin for today’s TC

VIDEO: @JLin7 reveals his toughest match up & why he calls @NickSwagyPYoung by his real name – http://t.co/Tm8CGfHct4 pic.twitter.com/b2s2sM4e4L

Jeremy Lin on Steve Nash: "He looks great. Mobile, quick. He looks like his old self in terms of being able to move."

Jeremy Lin on tough training camp, said Byron Scott is clearly establishing his imprint: "It's good for us. It establishes culture."

Jeremy Lin on Nick Young: "He's super cool, but I find it ridiculous everyone comes in and calls him Swaggy. He has to earn it!"

Lin-“No one calls me ‘Linsanity,’ no one calls him ‘The Black Mamba.’ That’s why I think it’s ridiculous people call Nick Young ‘Swaggy P!’”

Jeremy Lin is joking around that he thinks it's "RIDICULOUS" that people just call Nick Young Swaggy P. Says he has to earn it!

Lakers finish up scrimmage w/, what else, sprinting – Scott doesn't appear to be working them as hard today (at least during media time)

Byron Scott scrimmaging with some experimental lineups – including Wayne Ellington at point — and Price/Brown/Lin with Lin at 3 vs. Wes

Led by Jeremy Lin, the bench group is outplaying the starters in the final run here. Most everybody but Lin looks tired.

So, it's been Nash-Kobe-Johnson-Boozer-Hill this week, but maybe Lin, or Davis/Randle get in with the starters next week.

Byron Scott has kept the starting & bench groups all week, but will likely tweak things after the 1st game to see how different units mesh.

Jeremy Lin doing what he does best, getting into the paint, for a hoop eventually finished by Ed Davis at F… https://t.co/cst2YWPD7L

Story has it that Nick Young was playing defense on Kobe, tried to steal the ball, resulted in the injury.

#Lakers holding only one practice today after having double sessions the last couple days. Should have updates between 1-2pm.

Only one morning session for today. I would assume it is still about conditioning as this Hell Week style camp can really help players to play real NBA games with ease conditioning-wise. One main focus today will be rebounding (per Byron Scott).  It is hard to teach discipline and habit. Coach Scott pointed out after day 3 that he thinks players should find a body to block out instead of ball watching when rebounding a shot. Lin is always a good rebounding guard. He always get to the right position and will block out his opponent. Let us kick start today with this awesome photo below! They are going to make some noises in the NBA. 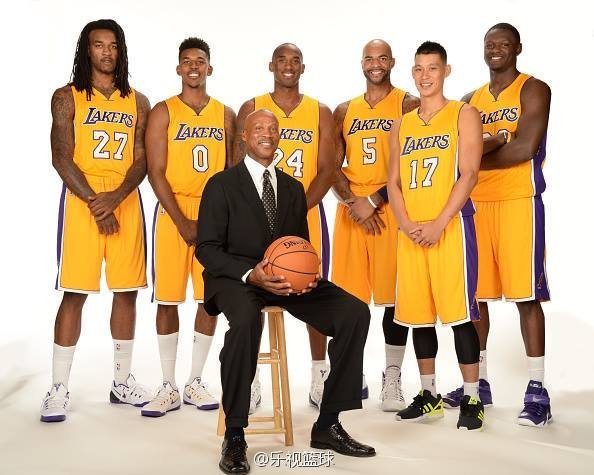