This is the 3rd day of the practice. Coach Scott put more and more offensive drills while the camp progress. It is clear that Lin is not the media’s focus for this LAL team. Therefore, we really do not get to see a lot of him in action. As we conclude this post, I want to point out that,

Note that Laker.com might release the whole video for today’s scrimmage.  We might get the chance to see more Lin in that video. –  Brent 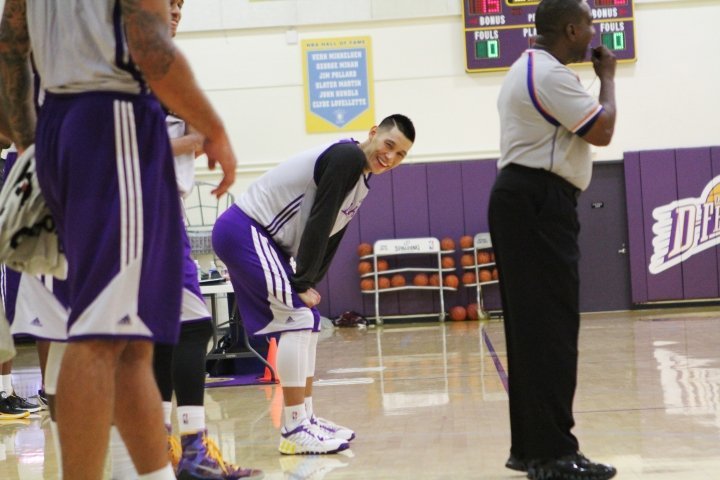 Below is a scrimmage for today (Provided by Lakers Nation), basically a lowlight for Lin. Well, I still include it because at least we gett to see Lin in action.- Brent

6:02 PM
2nd Practice should be started about now. Hopefully there will be some media coverage. –Brent

Two articles pop out, and both are positive about Lin. Good to know that more and more people covering NBA recognize Lin’s game.

TRYING TO PUT LINSANITY IN THE PAST – Scott Howard-Cooper (NBA.com)

Steve Nash on Jeremy Lin's strengths: "He get's to the basket. He can really get in there at the rim cause problems, create fouls."

Byron on Jeremy Lin: "Jeremy's looking great. He's just pure hustle. He just plays so hard, and he's so smart. He has a nose for the ball."

Again,  many running after the scrimmage. Lin and Co. are going to be well conditioned. Scott really set the tone perfectly it seems. But still it was mostly about discipline and conditioning. We will know more about how Lin will be used in the 1st preseason games vs DEN. –Brent

Ronnie Price continues to impress in camp so far. Kobe's a fan of how he plays. Has a chance as a backup PG to Nash and Lin.

We'll have full video of this scrimmage on http://t.co/KrBcjKlvxf later. Follow @LakersTV for the link.

Starters up 6-4 at this point per Eric Pincus- Brent

Wayne Ellington and Jeremy Tyler are subbing in for the starters when they need a rest in 5-on-5 drills. Ronnie Price fills in w/bench.

Still looks to be Nash-Kobe-Johnson-Boozer-Hill as the starting unit right now. Lin-Young-Randle-Davis-Sacre are the second team.

Kobe Bryant on the court again as the #Lakers go through their scrimmage. pic.twitter.com/M1vuFnltvM

Practices today will be taken later than yesterday;s schedule – Brent

The live-blogging of day 3  of TC will be continued here. From Day 2’s scrimmage lineups…Lin is so far penciled as a backup for Nash.

according to @LakersReporter this is the lineups for Laker's scrimmages today ( Davis was subbed out by Randle ) pic.twitter.com/mdjXRTkZXx

Also Ryan Kelly will be out due to the injury he got on day 2.

Lastly, Coach Byron Scott said in the interview that he is pleased on what he saw from Lin.

Byron Scott on Jeremy Lin: "I love the way he pushes the ball in the open floor. He hasn't disappointed me at all."