[Brent: This is a post written by @acbc, earlier this year. Chris Palmer of the ESPN said Lin is quietly having a top 15 NBA handle in one of his tweet. Lot’s of people disagree with it, including the fomer LAL PG Kendall Marshall, and PFV. The following is the exact words by acbc:]

I was listening to PFV’s comments on the Lakers game and he talked about lin’s handle and how it could be a combination of both physical and mental problems. This is a long piece I wrote last winter and may have posted on the other site. It can maybe explain why LIN continues to struggle until he finally nails down the working patterns of play for his teammates. Like I’ve said in the past, athletes all fear “paralysis by analysis ” because once you start to think while playing, you interrupt the flow of muscle memory. Hopefully everyone will better understand this after they’ve tried the parlour trick below to see how slow our cognitive brain operates.

I also amended this piece with something else I wrote about stress and how and why shooting 3s as a main weapon could be fatally flawed at crunch time.

January 27, 2014
Lin’s handle and shooting has been coming under fire lately. I’ve talked already a bit about how the Rox mind games has affected his shooting but I think the handle part is mental as well. Coach Lin often is thinking too much. At this level, athletes all work with patterns of many sets of automatic movements.

I’m no expert but I’ve studied sports psychology for many years to understand the causality between mental stress and choking to help some of better students. Last year I talked a bit about proprioception and the body awareness of interconnecting movements by lower brain functions. Kinesthesia is another key component in muscle memory and hand-eye coordination, and training can improve these 2 senses.

An example of this type of learned action is walking. People who have had a stroke often find it very hard to re-learn how to walk again. The multiple tiny muscles and receptors in the feet and toes needed for balance alone is difficult enough to relearn, never mind managing the actual awareness of where and which big muscle groups to use in action. Often teaching ourselves how to walk includes too much upper brain interference. This is the root cause of stunted movements.

Trick to Learn how Understand How Slow Our Upper Brain Works

There is parlour trick I use to teach how to serve in tennis. It is to illustrate how slow our upper brain works so that students will learn to trust their hands to feel for the face angle in order to find the target. Take a business card and ask a friend to try and catch it between his thumb and index finger as you let it go. Your friend will never catch it unless he starts closing his fingers before you actually release the card. The reason is that by the time your friends eyes sees you release the card and sends the command to up his fingers to close, it’s already too late. It takes that long for the commands to be sent from the brain to the fingers.

This is the reason an athletes actions gets stunted once they start feeling pressure. They start by getting out of the moment away from playing with autonomic actions and executing with set groups of actions. Choking is caused by sudden realization of the magnitude of a moment; what it means to win or lose, what it means to self esteem and how the expectations will become magnified. Proprioception allows a player to dribble without thinking about it while making decisions about making moves to pass, shoot or drive. Kinesthesia requires autonomic sequential operations of fine twitch muscle groups that allows that hands to feel for the ball while dribbling and shooting. Once it gets interrupted, it can go out of sequence and actions gets jerky. 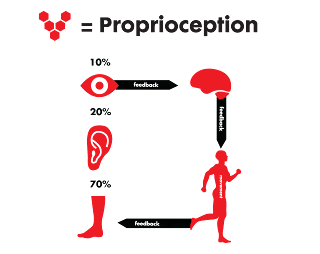 Walking across a board put between two chairs on the ground is easy so we can do it with no interruptions from our upper brain. If we put that board across a couple of skyscrapers, our upper brain will disrupt our movements because we have the real fear of death. What if we make a mistake! It’s when fear grips you that the upper brain tries even harder to command the body to make the correct movements thereby interrupting the smooth flow of operations. Just like the slow reaction time it took to close the fingers, it takes too long to react to mistakes of balance if the upper brain starts to choke with fear. It’s in this type of situation that a well trained action can go off badly. Shooting and dribbling or any fine twitch muscle memory can be disrupted to a point that shots will miss and handles can be fumbled. Dribbling or handles especially requires proprioception skills and kinesthesia because we are not ever looking at the ball. It is something totally done by the lower brain.

A Battle of Mental Strengths

The game of poker appears to be just a game of chance, but in reality, it’s far more than that. Once you add the human element, it becomes a battle of mental strengths. Winning at poker requires a personal belief in controlling your destiny. Then you must have conviction to accept the percentages and know that your hand will come. Believe that the flow of luck will come your way and take advantage of it when it does. Losing small pots is part of the flow. Remaining cool and unfazed by small losses is having a poker face to keep opponents from feeling your uncertainty. In all sports, the battle is won when the opponent starts thinking about what you are doing to them and not what they need to do to you.

Winning in basketball is not just physical. During the regular season, you can get away with winning by pure physical skills. Once you come to playoffs, the best come to the top and then the battle must be sort out by much more than physical skills. Accepting the stress factor in crunch time and playoffs is to use this human factor to create the right risk and rewards percentages of winning. As the screws get tighter, you must create ever higher percentage shots. Most players can shoot FTs with over 50-80% range of success. That distance has a very high probability for success to force your opponents to match. This is why midrange shots are so important to win championships and this is why HOUSTON will always struggle in playoffs and crunch time.

Good Coach’s Responsibility to Prevent Players from Thinking Too Much

I’ve often talked about how a good coach’s responsibility is to make the players able to play comfortably in the roles assigned to them. In this way the player doesn’t have to think too much or often and merely execute automatically to game situations. This is the unique ability LIN has to make his teammates play within their comfort zone. It is also why LIN has struggled because he has had to play out of his comfort zone, play out of position and have been jerked around with his minutes in such a way as to create as much fear and doubt in him as possible. Often, he has had to think as a coach to find solutions to defences while playing. Mchale has done everything possible to disrupt Lin’s mind and this is why Lin’s play has been below what he is capable of. Is it any wonder that Lin has shot and dribbled poorly.