[Editors comment: @Maknusia started this thread, however, since @TTNN is the original author of the content and he is also a poster here, I have credited this thread to him/her.]

———-
Original article from At The Hive fanposts

Kind of just play with our player stats from last season, and see what I get.

So the first set of numbers I was looking at are their assists vs. touches/game.

(players included are guards and small forwards who played at least 5 games last season and with minimum 10 min/game PT).

In general, the more touches a player had, the higher assist they will generat. The solid line indicated the league average assist number player generated with their touches. Each circle represent a player, with red ones are our currently players and blue ones were ex-Hornets played last season.

High lighted yellow are players who touches the ball a lot during a game, and generates lots of assist. And you will find very familiar names in that cluster: Chris Paul, John Wall, Stephen Currry, LeBron James, Russell Westbrook, Rickey Rubio, Ty Lawson, Reggie Jackson. Interesting to see Michael Carter-Williams in Sixers (labeled green) really only had average capability in generate assists, but he was leading the league in touches/game, kind of wondering whether Sixers were just simply trying to boost his numbers.

Out of 6 players who had greater than 90 touches per game, Kemba Walker had the lowest assist number, by a big margin. Kemba had 0.3 ast more per game than Batum with 30 more touches. With similar touches per game, Westbrook (labeled orange in the graph) has 8.6 APG, which is 3.5 more than Walker’s 5.1 APG.

So why is that, is Kemba Walker a ball hog?

I like to use %pass to sort out ball hogs. I calculated %pass = pass per game/touches per game*100%. That is a good indication on chances a player tend to pass out the ball when they touch it. 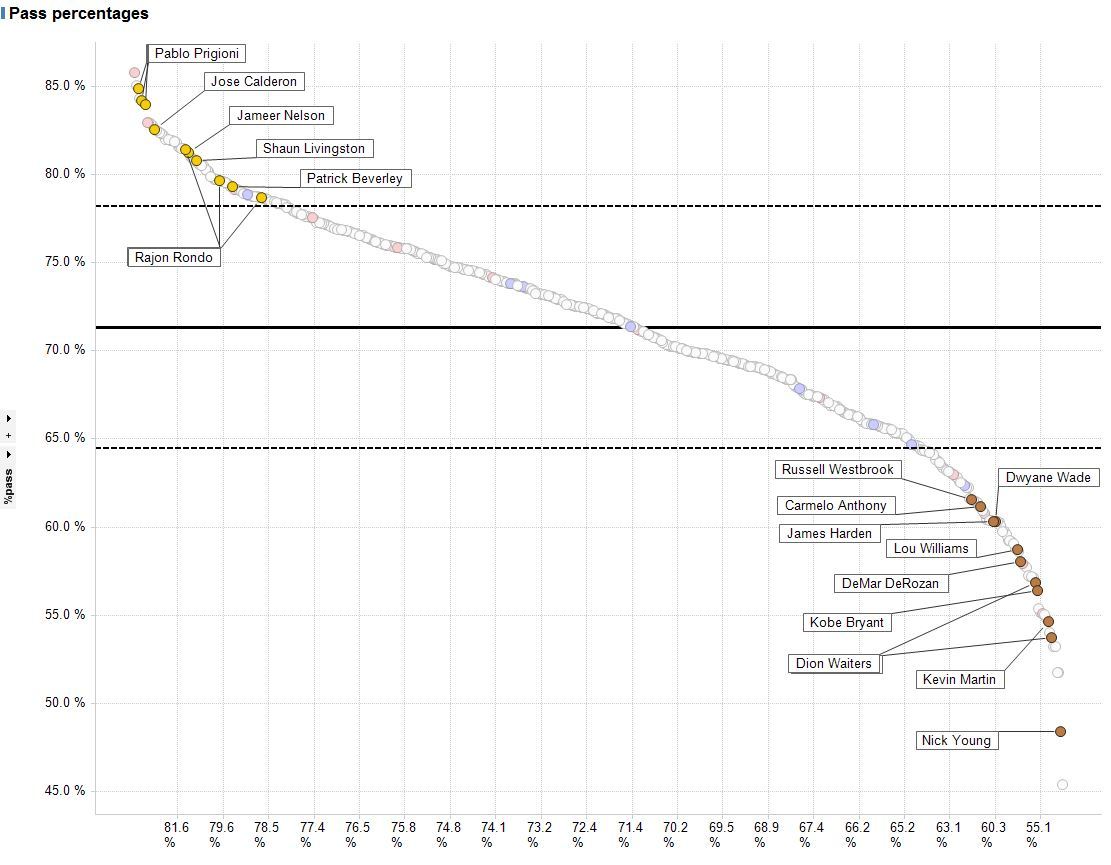 The solid line is the league average of all the players who played more than 5 games last season and with > 10 min PT. And the dotted line were indicating 1*SD from the average.

I found this view is a good way to cluster super passer from ball stoppers. Players with super high pass percentages tend to cluster with players who promote ball movement, but don’t really like to shoot the ball. And players who have low percentage of passes tend to be volume shooters who likes to shoot everything. And I did not realize Nick Young pass less than 50% when he touches the ball. 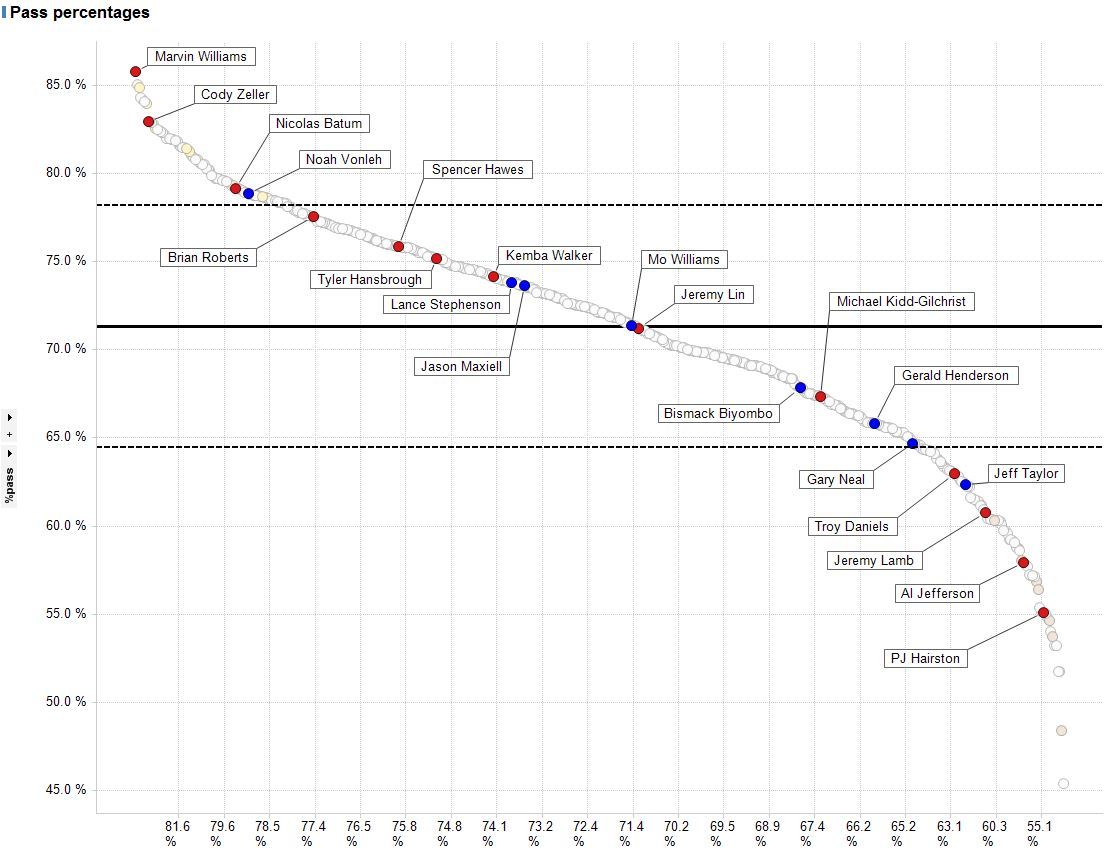 So when we look at the players on Hornets team, first thing I noticed is that Batum passes a lot, and that also is consistent with his low USG rate of only 14.7% last season.

To my surprise, Kemba Walker not only not clustered with non-passer group, he actually had above average in terms of willingness to pass the ball. Lin and Mo Williams sit right at the league average there.

Then the question is, why Kemba had low assist when he is a willing passer?

There are two kinds of passes. 1) you use your court vision or play making skills, and you hit an open man, then that pass results in an assist opportunity or hockey assist. 2) you don’t have a good look so you just get rid of the rock either leave the work to your teammates or you reset and then demand the ball later on, so that’s just a simple pass.

This number is a good indication on how active a player is looking for helping their teammates to score. 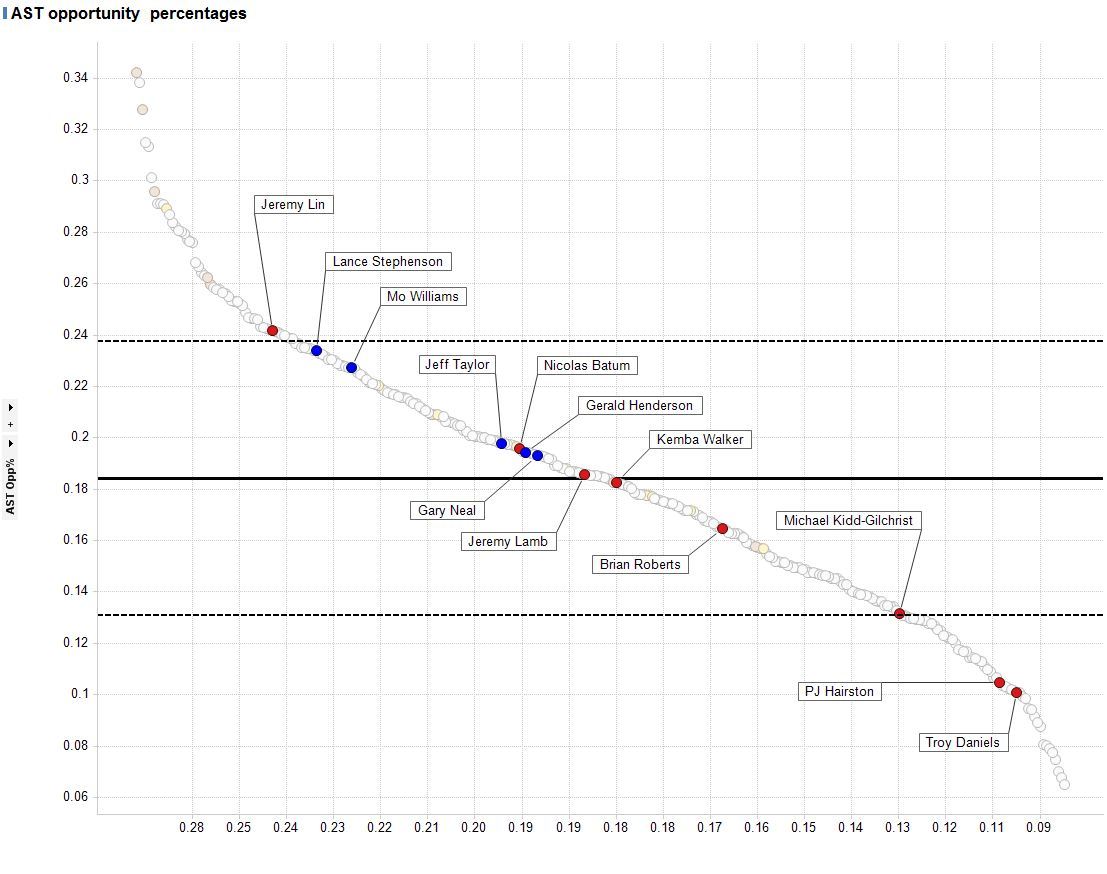 This is an indication on how good a player is in generate looks for their teammates, and a good play maker would have better success rate, and a not so good play maker would have lower success rate. (Unfortunately, finishing capability of teammates could affect this number a lot too, thus that might need to take into consideration when player were compared across different teams.) 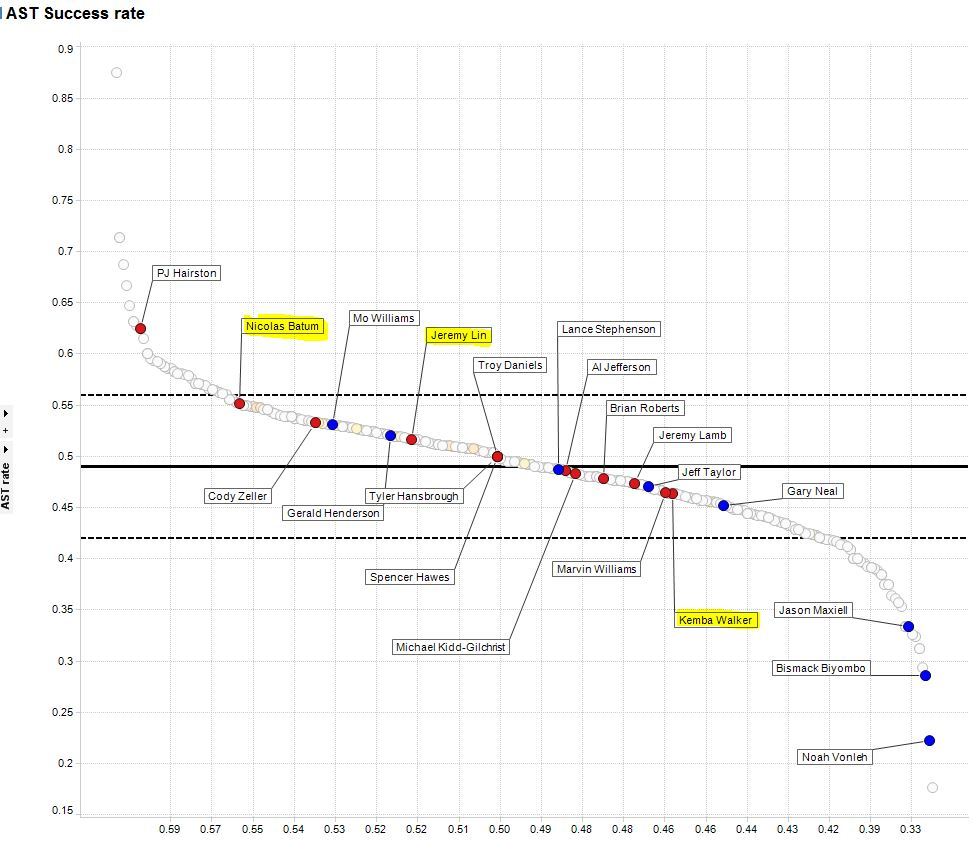 Batum is really good in terms of assist success rate, and Lin is above average too. Kemba Walker was below average there.

Looking forward to see Walker/Batum, Walker/Lin Batum/Lin pairing in game situation, and I would really like to see all three of them on court together, could be a really dynamic line up with three ball handlers, two play makers on the floor, would be fun to watch.