After two seasons in Houston we can finally say: “Thank God It’s over!”

At first they promised Jeremy to be the face of the franchise, be the go-to-guy… and then they threw him under the bus multiple times after they traded for James Harden. But, we know God has a perfect plan and everything happens for a reason. In Houston, Jeremy learned to improve his weaknesses:

McHale’s been pretty harsh with Jeremy these years, complaining about everything and never been satisfied… but in the end that’s been a good thing! Jeremy found a coach who played hard on him to make him a better player, like Pop did to Parker years ago. But, unfortunately, Houston is not San Antonio and McHale is not Pop. But this chapter is over, let’s see what the future sets for Jeremy.

As the title says, the numbers are incredible: Houston used to have 713 as code if I remember well, and the trade happened on 7/13!

But what will happen in Los Angeles? Lakers are currently in full-rebuilding mode after they tried to recreate Showtime with Steve Nash and Dwight Howard… and failed miserably.

So, let’s make it clear: they trade for Jeremy because it was an expiring contract, they received two picks from Rockets, they will fill the empty seats in Staples Center and get some sponsors.  And who knows if Toyota played a part in the trade? But we know it’s the perfect situation for Jeremy Lin!

Jeremy has an aging hall-of-famer player in Steve Nash in his role and an aging basketball-great in Kobe Bryant who seemingly can’t win games by himself anymore (post-Achilles injury). Perfect situation. Steve Nash can’t play lots of minutes in match and, my opinion, can’t start games with Kobe cause, in this way, he should sacrifice his body in defence. And clearly, that would not be a wise idea. And as for Kobe… well, after playing two years with James Harden, could there ever be something worse?

1. Steve Nash can really develop Jeremy as a PG, teaching him all the little secrets or his diet regimen, work ethic and his training methods.

2. And Kobe can teach him his mental toughness and his famous will to win – even if we know there’s no other in the league who hates losing game like Jeremy.

What’s best, in my opinion, is both Bryant and Nash have to heavily rely on Jeremy if they want to have a successful season.

I remember watching Jackie Brown’s DVD extra scene, one of Tarantino’s best movie, if not the best.

Well, there’s an interview with Tarantino in which he talks about the movie. He said he started to film the movie from the scene in which Robert de Niro and Samuel L. Jackson chatted in a bar. Tarantino said he looked in Samuel L. Jackson’s eyes and at first he saw he was scared to play in front of one of the greatest actor ever. But then, words after words, Samuel L. Jackson found out he had the leading role and De Niro was playing a secondary one. And then, Tarantino said, his eyes changed …

I think it’s what will happen to Jeremy Lin: at first he’ll be scared, playing with these 2 future hall-of-famers in one of the greatest basketball arena. But then, when he’ll realize he will have the ball in his hands and these players will ask the ball from him … 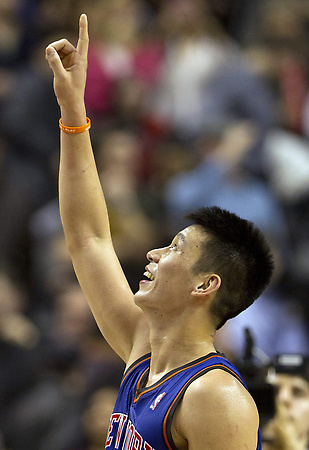 Well, it could be Linsanity all over again! I have a good feeling about it.

If Kobe buys into the system and Coach Byron Scott figures out the right rotations and the right system… The sky’s the limit!

And hopefully, someone in the sky could even lend a helping hand.